When I started this blog, I never imagined I would discuss fashion so often!  But I have developed a taste for ladies' pencils, and they just naturally remind one of the days of hats and gloves, when people other than British royalty dressed more formally. These petites are more dressy than the flashier marble pencils.  They were fashion accessories in their own times, and fit the fashions of the period. 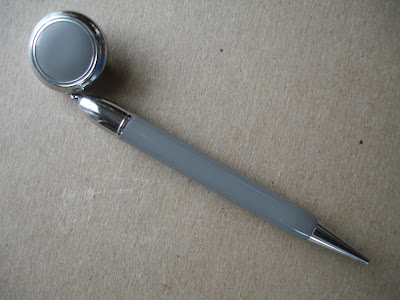 Grey is the new black, so I heard tell.  Here is a Ketcham and McDougall pin-on 4 inch pencil with retractable chain.  These are nose drive pencils, but the mechanism works perfectly.  This one probably dates to the late 1930s/early 1940s as it is celluloid, not plastic. 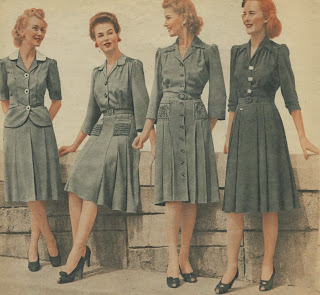 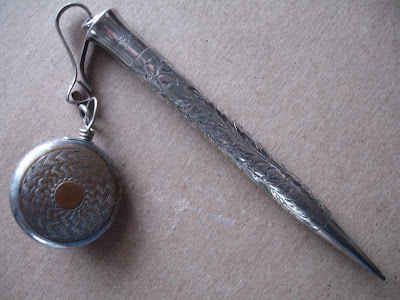 This is my first sterling silver Sheaffer, a bell-top (with ring) rear-drive pencil with ornate floral engraving, circa 1920-1925.  It is a tiny 3 & 1/2 inches long.  The flowers appear to be wild roses--the state flower of Iowa, where this pencil was made. It is attached to a pin-back Ketcham and McDougall accessory holder. 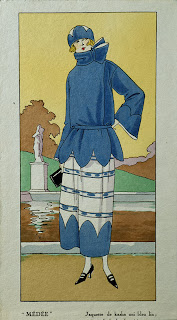 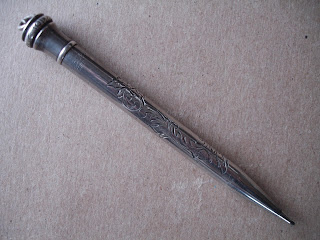 Another sterling rear-drive ring-top pencil, 4.25 inches, made by Wahl Eversharp, with leaf and flower design.  It probably predates the Sheaffer pencil by a few years.  It has a Doric column-capital top. 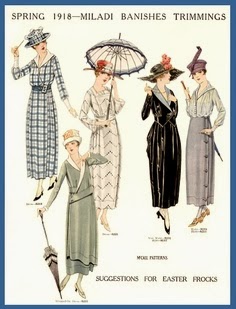 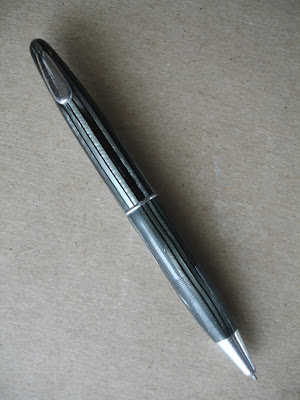 Finally, a Lady--the name for a Sheaffer "Tuckaway" 4 inch twist pencil with the thin center-band.  It is striated silver and black celluloid with the petite clip and snub-nosed point that all the "Tuckaways" have.  It sold for $3.50 between 1942 and 1947.  Think suits with shoulder pads. 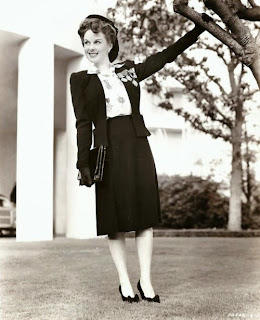 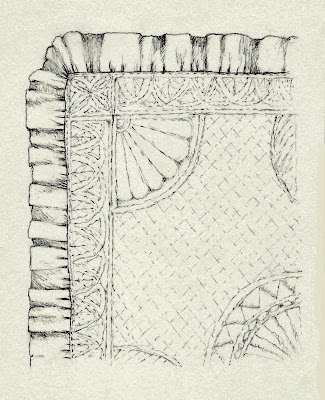 Welsh Quilt with Flounce
Posted by Martha at 3:11 PM No comments:

So many celluloid pencil cases are of "marble" design that I wanted to ponder marble a little.  The word comes from the Greek word marmaros, meaning "shining stone."  It was a symbol of immortality in Greek mythology, but in reality, marble is not that hard, it is soft enough to sculpt, and is prized for statuary. It can be eaten away by acid rain and pollution.  Pure marble is white; it is metamorphosed from limestone (calcium carbonate, thus the acid problem), but when things like minerals, clay, silt, and sand are layered with the limestone, colors and swirls of pattern are produced, as in these examples, below. 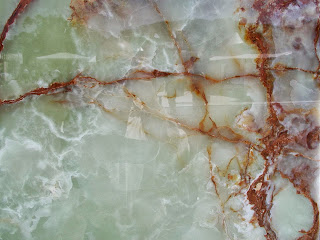 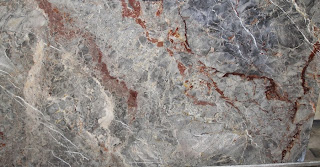 Fascinating patterns and colors were formed out of celluloid to mimic marble, and fairly successfully, too. Things that are marble-like are called "marmoreal."  Below are two Sheaffer Balance pencils of grey marble with red veining, from 1934-35. 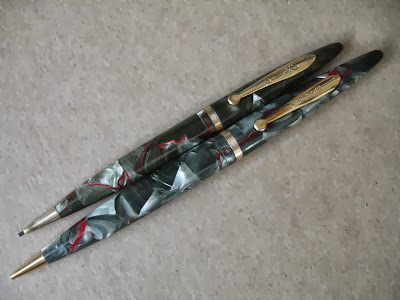 This American News Company marble is yellow-gold with grey veining. 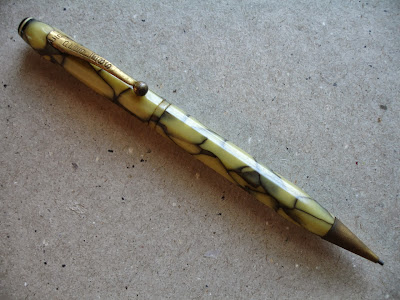 Two more Balances in black and yellow-green marble are shown with an unidentified all-white marble pencil. 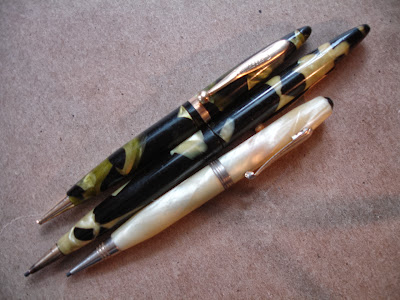 An earlier Sheaffer bell-top pencil from the 1920s (below) shows a fine-textured type marble in emerald green, very attractive on this large, weighty, rear-drive example. 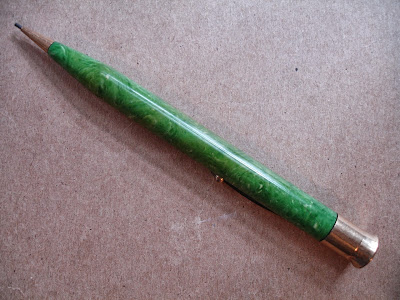 Of course, there is also this kind of marble, named for the stone they resemble, but made of glass. 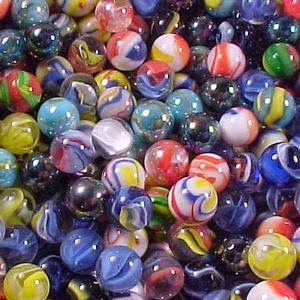 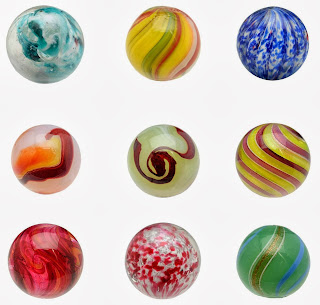 And finally, the biggest marble of them all. 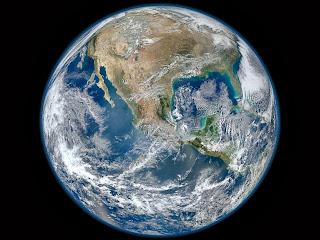 Something to ponder.
Posted by Martha at 2:05 PM No comments:

I needed another Sheaffer Balance like I needed a hole in the head, as my grandfather used to say.
However, as Shakespeare wrote in King Lear, "Reason not the need."  When this Balance in a color of marble I did not own showed up, I nabbed it.  But I also got a bit of a mystery along with it. 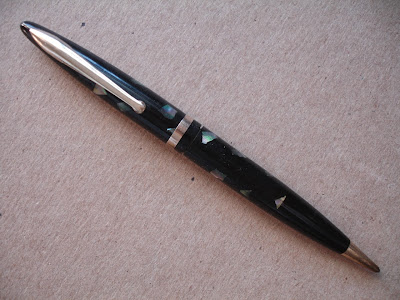 This is a color of marble called "ebonized pearl," introduced in 1934, which is black with the appearance of chips of mother of pearl floating in it.  Unlike other Balances of celluloid marble, it has a plain black tip and top.  As far as I can tell, all of the "ebonized pearl" Balances have the same black ends.  That's a mystery for another day. 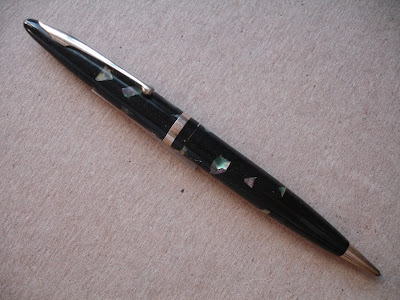 It is marble, and it has the "lifetime warranty" center band of 1934-35, so it should also have a flattened ball clip, but it does not.  Mysteriously, it has a "rigid radius" clip usually only found on the striated celluloid pencils from 1936 to 1940.  It is 4 & 3/4 " and uses 1.1 mm lead.  It has the imprint that includes Sheaffer's patent number.  It has the longer clip, like my "rose glow" striated Balance, which also has 1.1 mm lead and the patent number imprint. 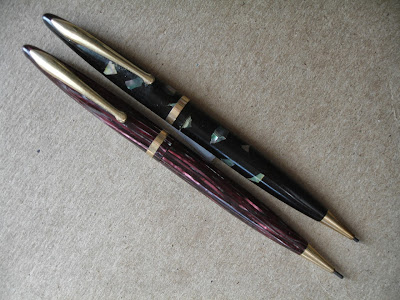 I'm going to call the "ebonized pearl" pencil with the later clip a Balance in transition.  You can imagine that when they changed to the new clip, they may have had some marble cases left to put them on. 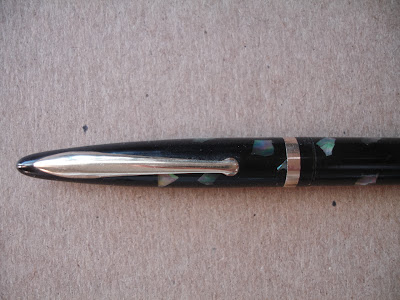 More transitions were slated for the Sheaffer Balance.  Below are two more striated Balances, but on these the rigid radius clip is shorter, and there is no patent number on the imprint, but instead the 350 cost number. They use thinner 0.9 mm lead, which according to Wikipedia was introduced in 1938.  It's possible the shorter clips were introduced along with the thinner lead. Perhaps they changed the imprint at the same time to show the retail price.  New clip, new imprint, and new lead size--it was like a new Balance. 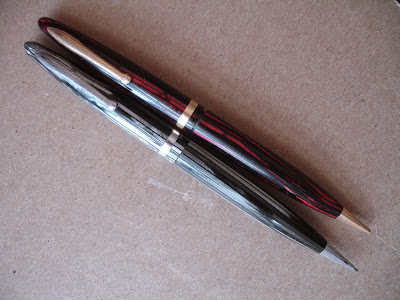 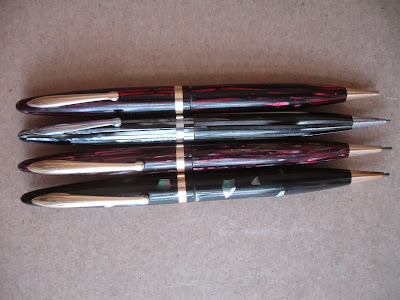 And that's the long and the short of it!