Who (of my generation, that is) doesn't remember the F. W. Woolworth's of their childhood?  Allowances all over the USA were spent there on Saturday mornings. 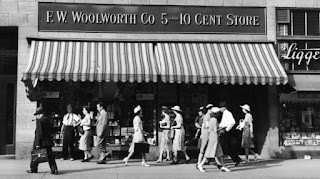 Woolworth's had their own line of mechanical pencils and matching fountain pens made by the Safford Pen Company, a division of the Parker Pen Company, Janesville, Wisconsin.  Parker Pen Company was the life-work of George Safford Parker, and although he died in 1937, lamented by his wife, Martha, his family, and his friend, Frank Lloyd Wright, the company continued on successfully.


The Safford Company made a pencil for themselves much like the Woolworth model called the Fifth Ave.  Not the Fifth Avenue, just the Fifth Ave. That still sounds a bit ritzy, but they are modest pencils, if you want to be tactful about it.  The family desk drawer had two of these, a red Fifth Ave., and a green unmarked Woolworth version.  They are tube-twist operated, with 1.1 mm lead.  They have nose-drive grip on the points, but are middle twist.  The red Fifth Ave. is 4 & 1/2 inches, the green Woolworth is 4 & 3/4 inches. Both have black flat tops, ball clips, and gold-ish trim. 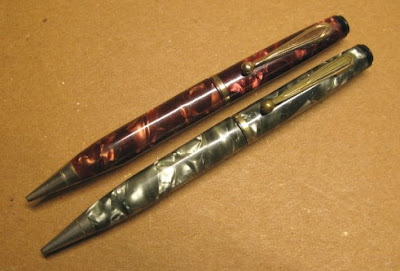 They are mechanically the same as the Parker "Parkette," but do not carry the Parker name.  Inside, they have a replaceable "lead cartridge." On both models, this is marked Woolworth.  It doesn't actually do anything except store the leads and hold the eraser. 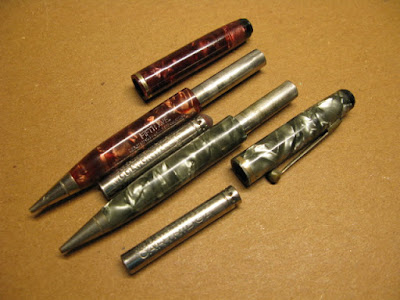 One of Parker Pens' interesting ideas was a pen which held ink pellets in a red cap on top of the pen.
The pellets became ink when dropped into the pen's water-filled barrel.  These were hugely popular with soldiers during WWI.  Maybe that's why the Safford pencils have a black top--they had gotten used to the general idea of a different colored top when making pens with pellets. 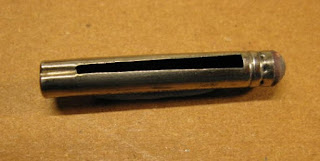 There's where the spare lead goes--in the slot.  On the other side is printed, "When empty, throw away and replace with a. . .

Fortunately, my family did not follow instructions well, so the empty cartridges are still there.

Did you ever see the dramatizations of Rex Stout's detective novels featuring Timothy Hutton as Archie Goodwin?  In "Death of a Doxy," Kari Matchett, playing a hipster nightclub chanteuse, 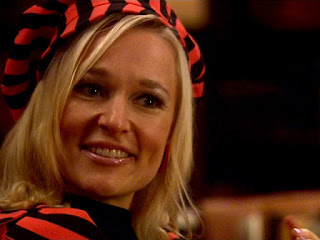 sees Nero Wolfe, played by that genius, Maury Chaykin, for the first time and breaks into a beatnik riff on the theme "Big Man."  Later, they bond over food, orchids, and imagination. 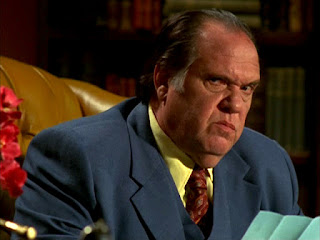 I couldn't help but think of that riff when I saw this Wahl Eversharp "75" pencil.  Big Man! 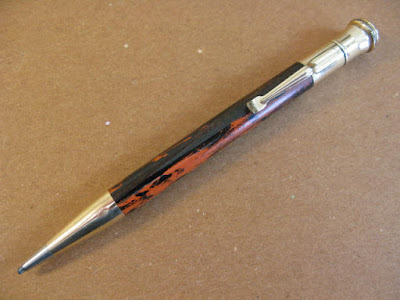 It's a hard rubber case with orange and black wood-grain pattern, called "mottled," by the company.  It was also available in plain red or black.  It has a gold-filled cap, clip, and point, with nickel tip.  The lead is big, too, really big.  The case is thick and hefty; length 5 & 1/4", width 3/8". Cost was $3. 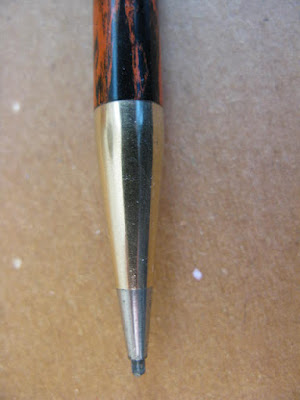 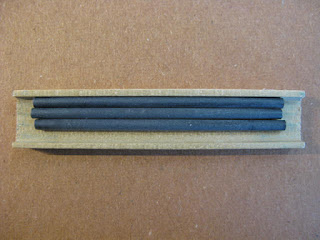 The lead size gave this pencil its model name, the "75," for the .075 inch diameter lead.  It was offered by the Eversharp company between 1924 and probably 1928.  Before this their pencils had been all metal.  "Big Man" has the same cap and clip design as those earlier metal pencils. 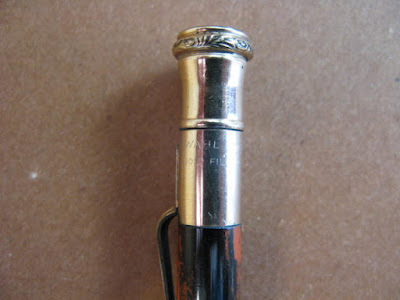 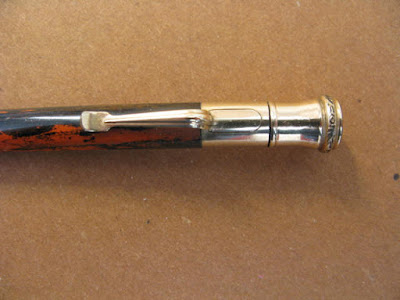 But the hard rubber was new and bold.  The size of the pencil made it all the more impressive.
I bet folks seeing it for the first time said whatever was the 1924 equivalent of "Wow."

Rarely do mechanical pencils hail from Minneapolis, Minnesota.  My dad, from whom I apparently got my pencil gene, was from there, too.  I was interested to own one, just for that reason, but also I like these small metal ring tops.

This a lady's pencil, gold-filled, delicately chased, and elegantly shaped with six sides.  It was made by The Henber Company.  It is 4 & 1/4 inches long, uses 1.1mm lead, and has a unique rear-drive screw mechanism.  It is marked HENBER, Gold Filled, Pat. Pend.  There is an engraver's space, but no name or initials.  The Henber Company was headquartered in a brick multi-story building near the Mississippi River in downtown Minneapolis.  They appear to have been in business from about 1920 to 1925, but there is very little information about them available.  As far as I have been able to discover, they only made metal mechanical pencils, not pens. 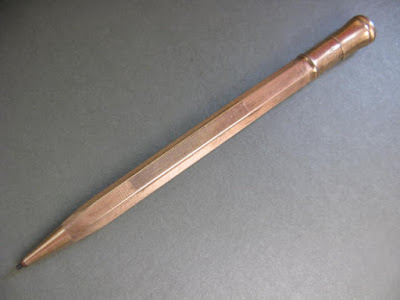 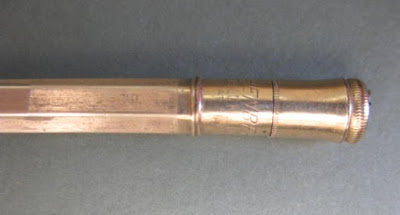 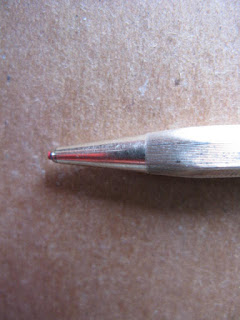 Henber's gimmick was to run contests and give away prizes, for example, in this 1922 ad, $1,000 or a 1923 Buick.  A drawing was printed above the ad, and the contest was to find all objects in the picture whose name began with S. 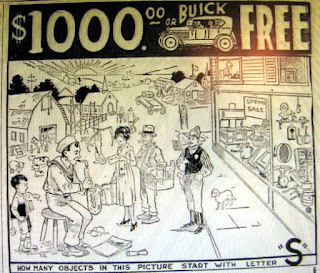 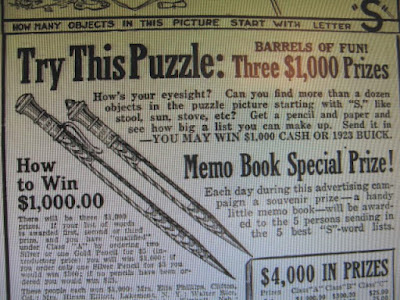 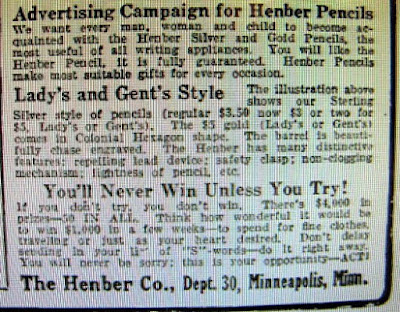 As the ad says, you'll never win unless you try, but to qualify, you have to buy a pencil first.
No problem! 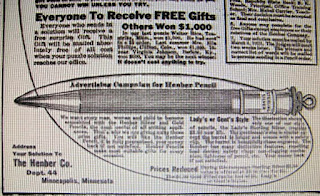