Recently I ran across a nice Autopoint "Twinpoint" pencil in its original box with leaflet in never-even-used condition.  It got me to wondering about double-ended pencils, so I looked for more of them and only found one other company who made a double-point mechanical pencil. It is on the other end of the alphabet from Autopoint:  the Zaner-Bloser company of Columbus, Ohio.  There are quite a few pen/pencil double-ended writing tools, but only these two pencils, as far as I know.
The Autopoint is the adult version, while the Zaner-Bloser is more the kids' version.  They both have a red and a blue lead.  Naturally, they are nose-drive pencils.


The Autopoint company has a long and complex history, having been owned by Bakelite, Union Carbide, Cory, the Hershey Chocolate company, Gillette, and Papermate. At the time this double-ended pencil was made, Autopoint was a division of the Cory Corporation.  To me, Cory is best known for its glass coffee maker, shown here in an ad from the Ladies Home Journal of 1948.  Its founder invented the glass filter used in the all-glass pot--kind of reminds me of something in chemistry lab! 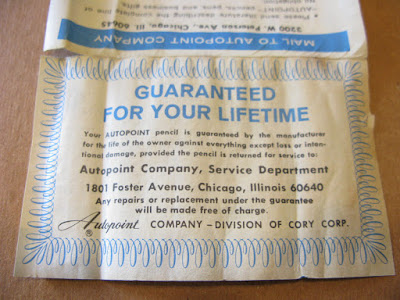 1801 Foster Avenue, the Autopoint factory in Chicago, is now a brewery with taproom.  Autopoint is now an independently owned company located in Janesville, Wisconsin, from whom you can buy lead in several colors and sizes, and other Autopoint creations, including the Twinpoint and two other styles of mechanical pencils.  Here is a link to the current Autopoint Catalog 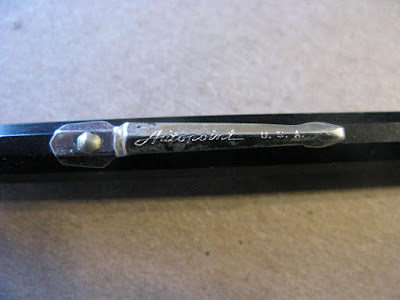 This is the riveted clip used by Autopoint for decades.
Now the Twinpoint pencil has an "accommodation clip" which can be reversed or even removed. 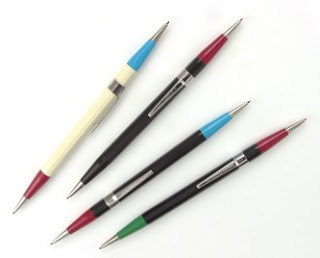 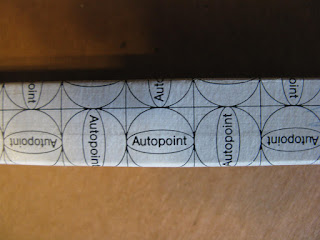 Isn't that a stylish logo?
And here are the two points. 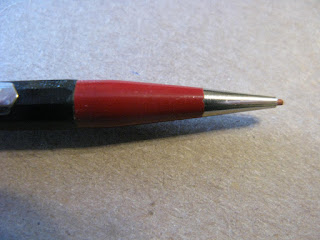 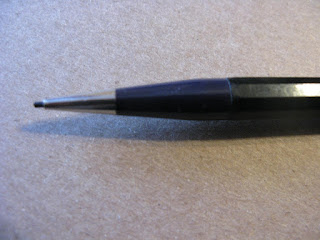 Posted by Martha at 9:59 AM No comments:

Pleased to Meet You 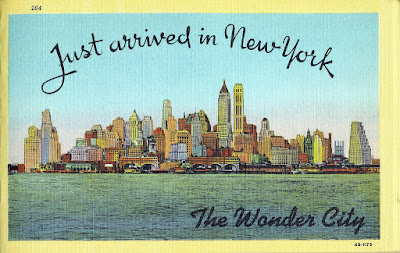 It's always a pleasure to receive an introduction to a new-to-me brand.  This time it is Marx Finstone's New York City pen and pencil company that created this 5 & 1/4 inch Eclipse.  My new pal is a 1930s model with the patented 2-piece clip, which gives the patent date, 9-18-23, shows the Eclipse logo in a circle, and also says Eclipse in caps. 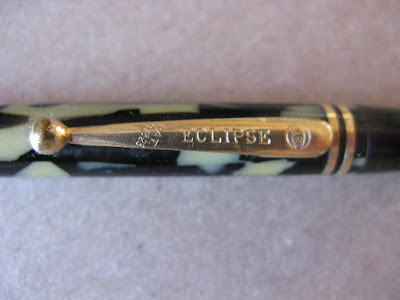 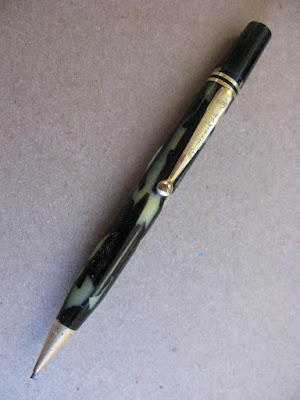 It is a flat-top with a black cap and gold trim. 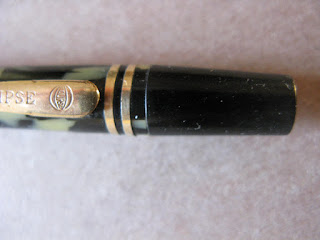 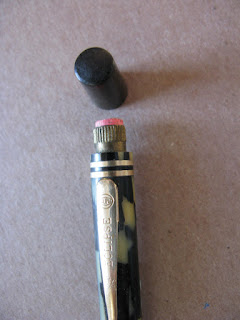 The cap has an eraser under it.  It is a rear-drive pencil with the larger 1.1 mm lead,
and yellow-green and black celluloid marble case.
If the top were pointed, you'd think of a ball clip Sheaffer Balance;
they are similar in substance and style. 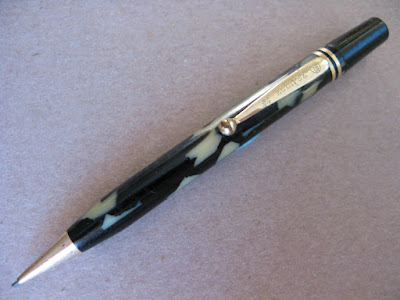 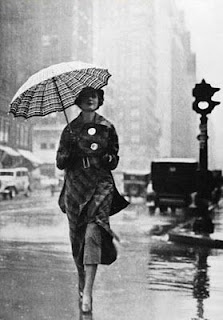 It's good to be back in New York!

Posted by Martha at 6:44 PM No comments:

The years immediately after WW II were an interesting time.  Materials for manufacturing became available again; plastics, for example, took a big upturn.  Fashion became possible, and art became modern.  Veterans could attend college via the GI Bill, and Europe was re-building thanks to the Marshall Plan. 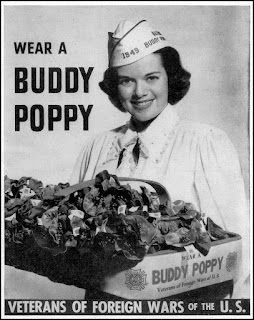 Drive-ins and burger stands were springing up, here's one photographed in about 1948--McDonald's! 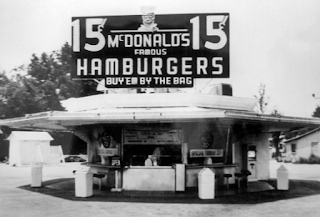 TV was available in its infant form, a 7 inch screen in a big wood cabinet that looked like a radio.
Radio was still the most popular medium for entertainment.  NBC's "The Sheaffer Parade," featuring California bandleader and vocalist, Eddy Howard, was on Sundays at 2 PM, sponsored by the Sheaffer Pen Company.  They also sponsored a Saturday morning show on CBS radio, "The Adventurer's Club."

Sheaffer pens, both fountain and ball point, with accompanying pencils were heavily advertised on radio and in print, with an emphasis on dependability.  Pens were offered with a lifetime warranty, and were marked to indicate this with a white dot.  Their matching pencils carried a white dot, too. 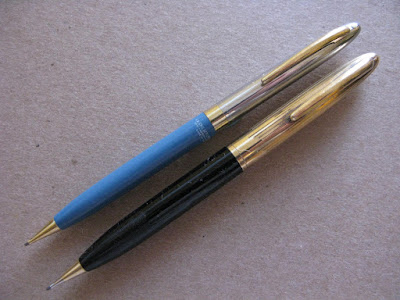 Here are two of the top Sheaffer pencil models of 1948, the Sentinel, with a gold and silver cap and plastic barrel (and a white dot), and the Crest, with an all-gold cap, either 1/10 14 k gold-filled or all 14 k gold, and plastic barrel.  Gold and plastic together--that seems to sum up the post-war era nicely. 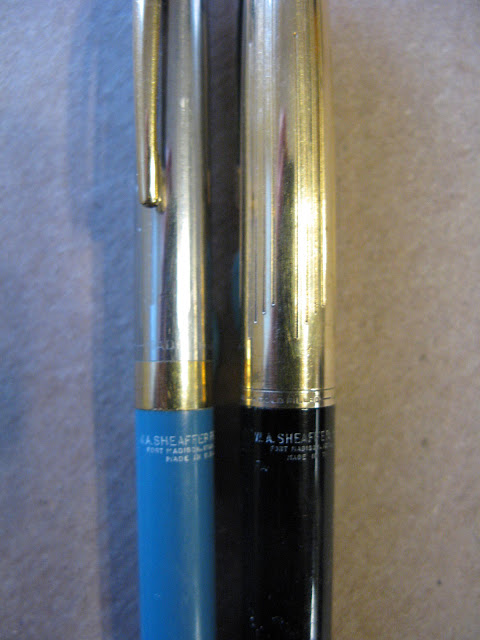 This Crest is gold-filled, both have the Sheaffer imprint on the cap and the barrel.  They use the thin lead of the time, 0.9 mm, and have erasers under the cap.  The Crest model is also marked FA 500.
F for filled? A --no clue, and 500 would be the price of $5.00, presumably. 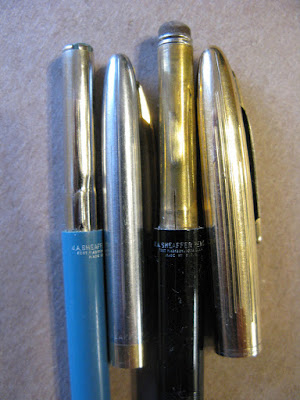 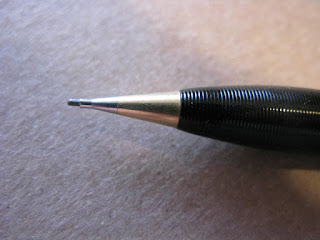 The Crest model has a double-layer point, to prevent lead breakage, according to ads of the time.
They are sleek and modern, not unlike this 1948 Jackson Pollock, "Number 14." 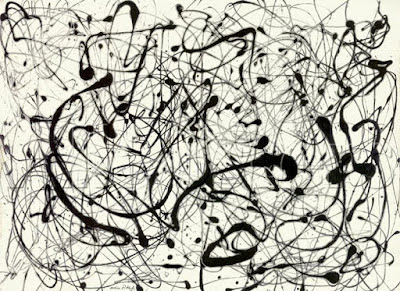 Reminds me why I don't collect pens.

Posted by Martha at 9:15 AM No comments:

Sometimes you take home a pencil just because you want to--you see it and say, "Oooo, pretty!"  Just like a kid in the candy shop. I really liked the smooth shape of this one.  I liked the translucent green of this celluloid marble, along with the veins of red and swirls of cream.  I don't think I have ever seen this celluloid before--it caught my eye. 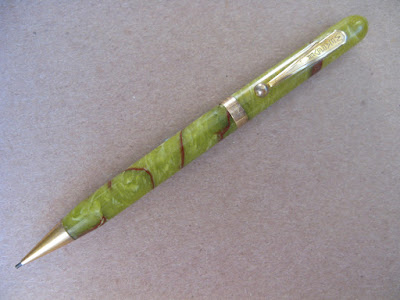 It's a Wearever, from the New Jersey company that began in the 1910s, and went on to mass-produce jillions of pens and pencils with, most collectors say, a penchant for quantity over quality.  This pencil is most likely from the late 1920s/early 1930s, with a ball clip, and a nice center band.  The gold-tone trim is in good condition, except where worn on the ball of the clip. 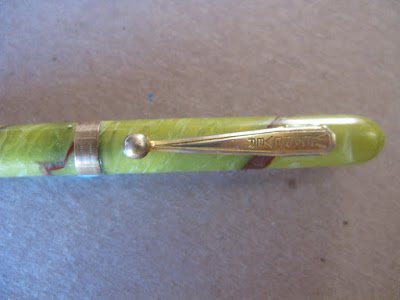 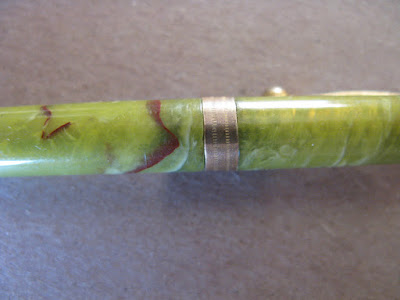 It is a middle-twist pencil, with an eraser under the cap, and the 1.1 mm lead of the time. 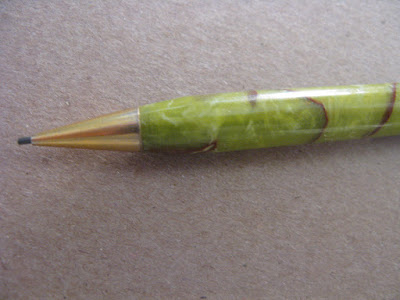