Before Anderson - Erickson Dairy ordered their advertiser pencils from Sheaffer, what a surprise!, they used Shaw - Barton.  From the family desk drawer:

Shaw - Barton started making pencils in 1940 when they purchased a calendar company (making other specialty advertising items, as well) in their hometown of Coshocton, in east central Ohio.  This is a slim 1940s middle twist pencil, using the recently introduced slim lead (0.9 mm).  It is 5 inches long. 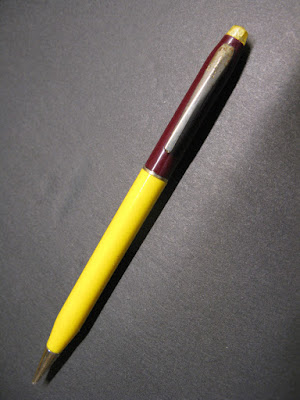 Shaw Barton is stamped into the top of the slightly rusty clip--you need a magnifying glass to see it.
The top "jewel" is crackled transparent yellow plastic, maybe Lucite, an acrylic-based plastic.

Other family A-E pencils can be seen here:  More Sheaffers in the Waterman Family Desk

Redipoint Advertisers from the Family Desk

Although I don't usually collect pencils with advertising, these were foisted upon me.  They were in the family desk drawers and pencil cups, and it just didn't seem right to toss them.  They have a connection to places my great aunt lived and worked.  From the time capsule of family history, so to speak. 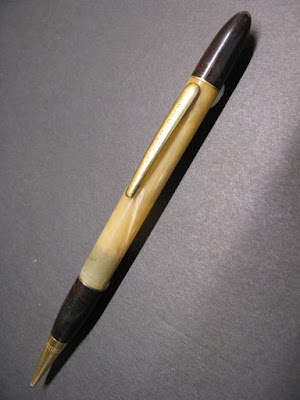 This 1930s Redipoint nosedrive pencil has cream and tortoise shell celluloid marbles and gold-toned trimmings.  The Redipoint company story is complicated and even scandalous! You can read all about it on Jon Veeley's pencil blog linked above. 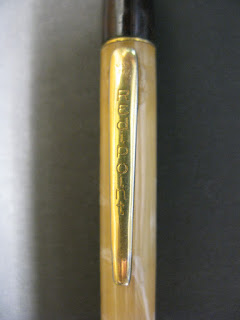 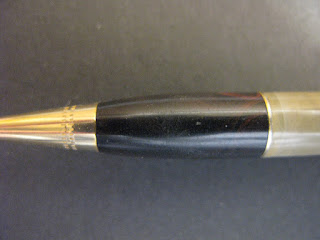 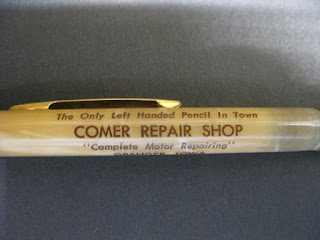 The left-handedness of this pencil refers to the way the ad was printed on the pencil, so it could be read if you held the pencil in your left hand.  It originated with the Comer Motor Repair Shop in Granger, Iowa. Slightly later, the shop went right-handed with this Redipoint. 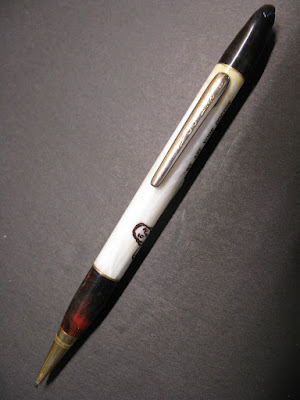 It has the same nose drive mechanism, the same tortoise shell marble, but has a white center and new advertising gimmick:  the shop is your "doctor of motors."  A repairman is using his stethoscope to diagnose a convertible's ailment. 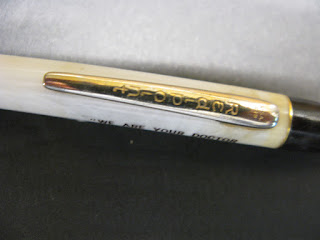 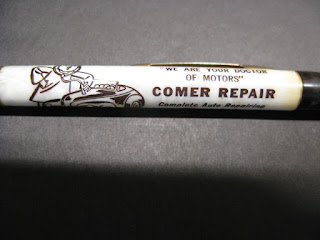 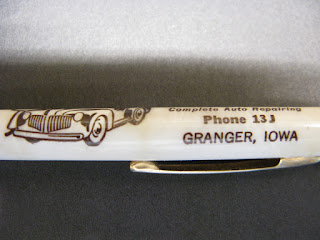 This final Redipoint has an eight-ball telephone dialer end cap.  It features the same nose drive mechanism, three-part construction, and has the same clip as the other Redipoints above.  The plastics are all solid colors, and the advertising comes from an Ogden, Iowa, feedstore which cautions its customers not to "get behind the eight ball" and run out of feed.  It ends with, "Thank you for your cooperation."  You'd almost think the farm animals had written the text! 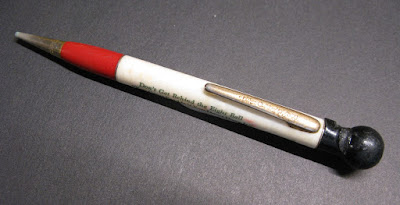