Red makes me happy when I see it, what's wrong with red that bulls don't like it?  It has probably far more to do with the painfully glittery, over-the-top costumery of the persons waving the red cape in their faces.  I'd be a little annoyed by that.

Probably if I keep on with my pencil preoccupation I will have more red pencils than any other color.  Red lead was once popular, too, for making check marks on lists, putting red-letter dates on one's calendar, and going in the red in one's accounts.  The Dur-O-Lite pencil with the knife in the top had a nubbin of red lead in it.  You can still buy red lead from the Autopoint company, once in Chicago, now in Janesville, Wisconsin.  Thank you!

This is an Autopoint brand in red marble with black tip and top, a Realite pencil: 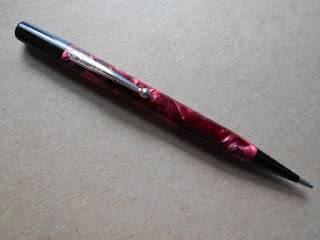 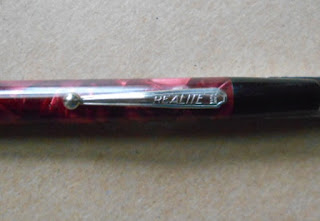 The clip also says Made in USA.  Nice eraser under the cap.  It's working perfectly, and hardly looks its age, which is over eighty!

The hard-working brother to the red marble pencil is this red Realite with exposed eraser and no-nonsense, riveted clip.  It has red lead, and same black tip, and is 8-sided so it won't roll off your desk.  It's made a lot of check marks in its time-- it could date back to the 1920s. 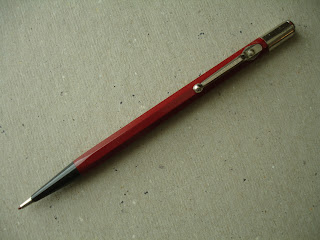 If you have need for some lead for a vintage pencil, you can order it from Autopoint:
Autopoint, Incorporated  They seem to be a nice old-fashioned company that doesn't think it is too much bother to send you a few leads.  If you like, you could choose red.
Posted by Martha at 10:18 AM