Just out of high school, my mother became a Teamster.  She worked as a secretary and pay-master for a local Teamster's union and, as such, needed to be a union member. The boss thought so highly of her that he had a window installed in her office, right through the solid brick wall.  Imagine her surprise when a face appeared in the new opening, and it was a well-known neighborhood kid, now a mason and her window-installer.  "What are you DOING here, Tony?" he asked.  "I work here, what are YOU doing?" she replied.

Mom's favorite class in high school was typing, and she learned shorthand, filing, bookkeeping, and other office skills, as well as how to operate a switchboard and dictaphone.

She continued as a secretary, helping put Dad through college and seminary, later working for a seldom-seen bishop who left his dictaphone cylinders on her desk.  Instead of Tony, her nickname now reflected her married status--it was "Mrs. New-Girl."  Women office workers were all known as "girls," but only the youngest male officer workers were "office boys."  What can I tell you?  That was then.

One of the favorite pencils of office professionals was something new and clever, the STIK.  This skinny little mechanical pencil was magnetized to stick to any metal surface, available quickly to make a note.  Filing cabinets, desks, typing tables, and other office paraphernalia were made of metal then.  Mom had two STIKs, a metal one and a celluloid (or plastic) and metal one. 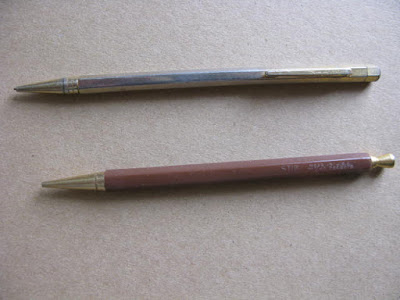 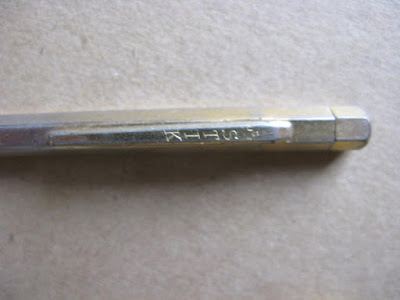 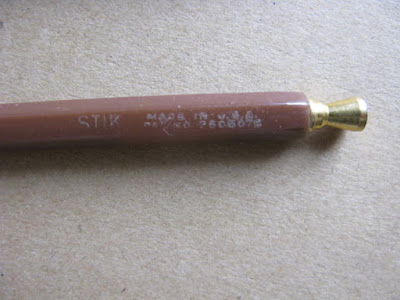 They are nose drive pencils with 0.9 mm lead and a miniscule eraser inside each when you pull the tops off.  The STIK patent number is on the brown one with the knob top, while the all-metal one says USA, STIK on the clip and has the same patent number (2508075) and Made in USA on the side.  It was the patent of one Owen Morris of New York, applied for in 1949 and issued in 1951. Apparently Mr. Morris thought it would be great for sticking to the dashboard of a car as well as to the side of a filing cabinet.  Imagine, dashboards made of metal!

This small, simple, but attractive pin-on fob with slim, three-inch nose-drive pencil also went to the office with Mom back then.  The fob has the same pin mechanism as the Beckhard Line FLIP, but is unmarked, as is the pencil.  (See the blog:  NOT a Ketchem & McDougall ) 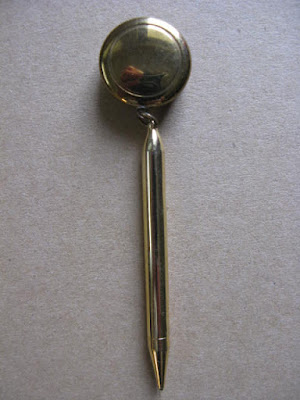 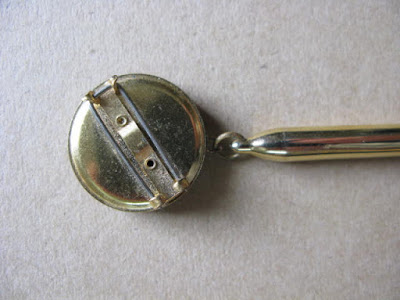 In addition to the STIK pencils, Mom also used her Iowa-made Sheaffer Skripsert pen and pencil set in blue with chrome caps.  The pen has a stainless steel nib.  The Sheaffer ink cartridges of today are still a perfect fit.  And Mom still loves blue. 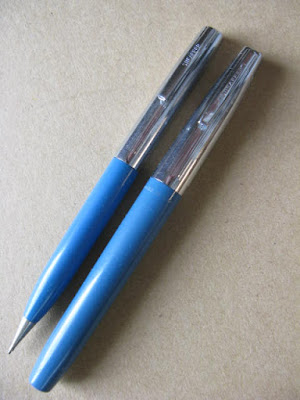 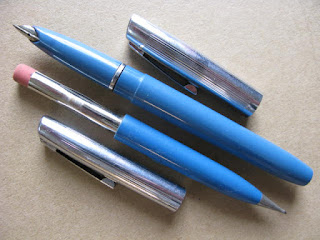 For more about this model see the blog: Skripsert Pencil