This Pencil Holds a Thrill. . .

Sheaffer's 1925 ad for their large flat-top pencil enthused:  "This pencil holds a thrill for those who love fine things."  True today, too.  The Sheaffer "Titan" pencil was introduced in 1925.  The jade green colored marble was introduced the year before, along with Jet black, and the Sheaffer desk set. This was the year Sheaffer switched from hard rubber to Du Pont "Radite." 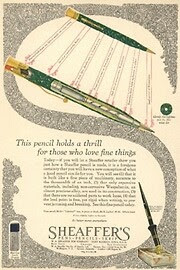 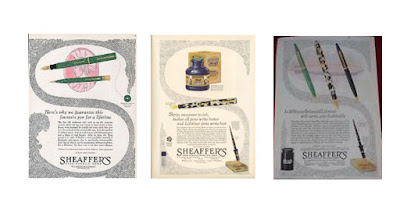 About this same time, the designers also introduced the connected R and S at the end of the name,
below the apostrophe.  The black and pearl marble coloring must have followed very shortly on the heels of the jade green color.  Sheaffer "lifetime" flat-top pens were also very handsome.  At this time, Sheaffer did not make matching pen and pencil sets, but similar colors were available.  The white dot, indicating the lifetime guarantee, was set into the top of the pen cap. 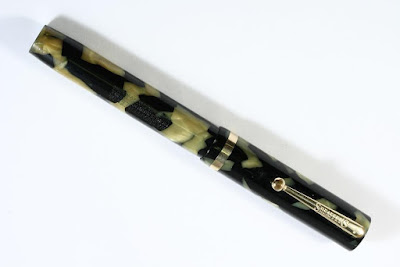 Titan pencils are 5 & 1/4 inches with a rear-drive mechanism, 1.1 mm lead, and ball-end clip.  They have gold-filled trim.  On the top, the mark (in all caps) reads:  Sheaffer's, Lifetime, Gold Filled, Pat- Pat Pending. 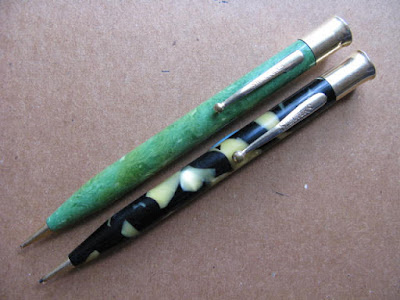 They continued to be made until the "Balance" design came along in 1929.  Above, you can see the two slightly different clips.  The jade pencil is the earlier. 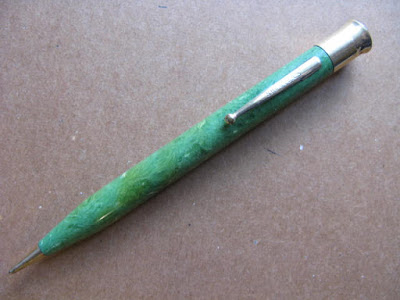 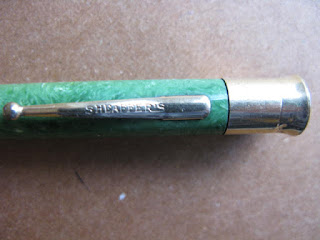 The jade pencil 's clip has slightly different lettering, and the cap is a fraction shorter than the black and pearl pencil's cap.  To this longer cap, they added the words "Made in the USA." 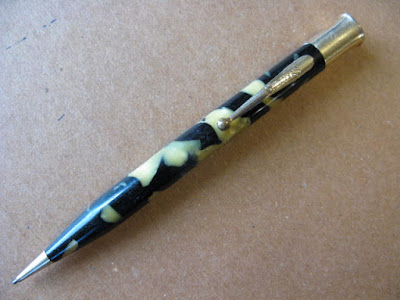 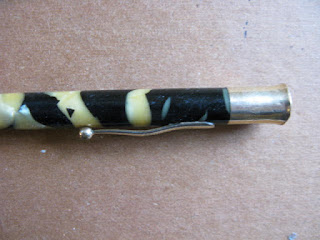 Titans were six formidable Greek gods, most likely the namesakes of this pencil, but it is also the name of Jupiter's largest moon, the one that looks to be made of marble. 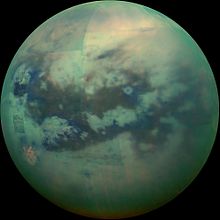